8th Day Software specializes in highly technical solutions for healthcare companies across the country, but perhaps its greatest innovation has little to do with code and lots to do with location.

Dave Loschinskey would fit in well in Silicon Valley. His resume includes a stint as a Fortune 50 healthcare technology executive and leader of a multimillion-dollar consulting practice at Oracle. But recently he has been spending less time in San Francisco and more time in West Tennessee.

Henderson is a community about 15 minutes south of Jackson in Southwest Tennessee Electric Membership Corporation’s service territory. The town of 6,000 is known for its barbecue, school system and proximity to Chickasaw State Park and Forest. It is certainly not the typical place to put a software company.

“People think I am either really smart or crazy to build a software company here,” says Loschinskey, CEO of 8th Day Software.

“This is the result of a couple of frustrations I had when I was the chief information officer of a big healthcare company,” he says. “We did our best to use resources responsibly, and that often meant that we outsourced some software development to other countries. Unfortunately, there were time-zone challenges, language barriers and culture differences that prevented us from creating the innovative products we wanted.”

Companies needing custom software typically have two options: expensive consultants from Atlanta, Chicago or New York or inexpensive developers in Pakistan, India or China. “What we are doing here in Henderson is creating another option,” says Loschinskey. “We share similar time zones, languages and cultures with our clients, but our operating expenses are much lower than other U.S.-based providers. It allows us to create innovative solutions at cost-effective prices.”

“We were at Stanford University earlier this year, demonstrating a product for clients, and we showed them on a map where the product was built,” he says. “They could not believe that it could happen in such a small town.”

Loschinskey is an advocate of rural America, quick to mention the benefits of lower taxes, inexpensive real estate and little traffic.

8th Day has seen success in finding the talent it needs in Henderson. “Millennials don’t want to sit in traffic,” says Loschinskey. “They want to ride their bikes to work and go visit their kids at school at lunchtime. These attributes are more valuable than earning a few more dollars in an urban area.”

Kaleb Glass was the first employee hired by 8th Day in Henderson. Glass was a student at Freed-Hardeman University, just down the street from 8th Day’s office, when he first learned of the company. “I received an email from a professor about this job opportunity, and I jumped on it,” Glass says.

“I expected to end up in a big city,” says Glass, a software engineer and father of two. “But Henderson is a great place to raise kids. It is a good community with good people, and there is no traffic — I always know how long it will take me to get to work.”

“We’re thrilled that 8th Day Software chose Henderson to grow its domestic sourcing business,” says Henderson Mayor Bobby King. “It offers employment opportunities for Freed-Hardeman University and other graduates who previously would have had to work in a city to pursue a career in information technology.”

Kaleb Glass is a software engineer that specializes in security. Glass, the first employee hired by 8th Day in Henderson, ensures that the sensitive medical information handled by 8th Day’s software is protected.

Broadband Internet is a key part of the 8th Day story, and Henderson has something rarely found in rural Tennessee — a gigabit fiber network.

“Ninety percent of our clients are in other parts of the country, and broadband allows us to connect and collaborate,” says Loschinskey. “We have clients in places like Ann Arbor, Mich., and Chicago who can’t get gigabit Internet, and they can’t believe that we have it in Henderson.”

“Encouraging entrepreneurs is important to us in Henderson,” says King. “Offering gigabit Internet, high school coding classes, a strong chamber of commerce and a quality of life that people of all ages can enjoy, Henderson is an ideal incubator for business start-ups.”

“We at 8th Day dispel a lot of myths, and people have a different view of small towns when they hear our story and see what we are doing in Henderson.”

Telling the story of rural Tennessee

Tennessee’s electric cooperatives are celebrating innovation and creativity in rural Tennessee and exploring opportunities for co-ops to be advocates for our communities. “Concern for community is one of our guiding principles,” says David Callis, executive vice president and general manager of the Tennessee Electric Cooperative Association. “Whether it be broadband expansion, political affairs or economic development, co-ops have unique opportunities to improve lives in real ways.”

We need you to help us tell the story of rural and suburban Tennessee. Use the hashtag #smalltownsbigideas on Twitter and Facebook to tell us about the great things happening where you live. 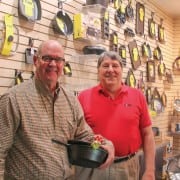 Be prepared for winter storm
Scroll to top