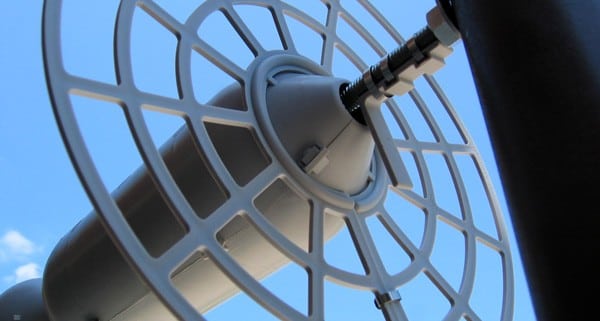 If a squirrel’s body falls to the ground, the power blinks but stays on. If it falls into equipment, like a transformer, safety measures shut off power. The cooperative must send a lineworker to remove the animal and restore power.

Squirrels are the main culprit, but they’re not alone. Opossums, raccoons, foxes, snakes, birds, and other animals trigger outages, too.

3M’s Electrostatic Animal Guard resembles a tarantula. A dozen metal rods arch like bent legs around an insulator, forming an electrostatic barrier. Errant wildlife receives a mild shock if they get too close; the guard acts as an electrified fence.

Alternatives such as the Rauckman Wildlife Shield™ and ZAPShield™ create a barrier to keep teething squirrels, rodents, snakes, and other animals away from dangerous parts of electrical infrastructure. Frisbee-sized plastic or metal discs guard equipment in substations, too.

Animal guards are not foolproof. But the measures help drive down the number of outages caused by animals. Another option is building habitats to help animals and power safely co-exist.

Osprey and other birds of prey don’t use power lines as highways. Instead, they’re attracted to poles as perches. Raptors often nest on top of utility poles—a dangerous spot. An osprey’s nearly five-foot wingspan can form a conduit between an energized power line and a neutral wire. Like squirrels, these birds may get hurt as high-voltage electricity looks for a path to the ground.

Some cooperatives encourage birds to settle on man-made nest platforms. The utility removes a dormant nest from electrical equipment and places the nesting material on a nearby raised platform (as tall or taller than the utility pole). When the birds return to the area, the U.S. Fish and Wildlife Service claims odds are good they’ll use the safer structure.

Megan McKoy-Noe writes on consumer and cooperative affairs for the National Rural Electric Cooperative Association, the Arlington, Va.-based service arm of the nation’s 900-plus consumer-owned, not-for-profit electric cooperatives.  B. Denise Hawkins contributed to this story.

Tightening the Net
Scroll to top