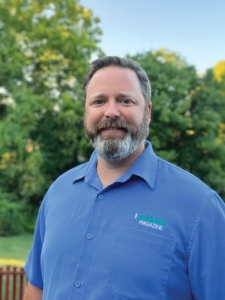 Chris Kirk has been named editor of The Tennessee Magazine, replacing Robin Conover who retired at the end of September.

Kirk joined the magazine team as field editor in May of 2005 and has served as associate editor since 2011.

“Chris is a journalist of integrity who has been an asset for the magazine for many years,” says David Callis, executive vice president and general manager of the Tennessee Electric Cooperative Association, publisher of the magazine. “He has shown tremendous skill, commitment and passion, and I know the magazine will thrive under his leadership.”

Kirk follows in the footsteps of his father, Jerry Kirk, who also served as editor of The Tennessee Magazine in the late 1980s.

“As far as I’m concerned, I step into this new role as a steward of the quality, informational, entertaining publication that for 65 years has been telling the stories of Tennessee’s electric cooperatives and the communities they serve,” says Kirk.

With more than 775,000 subscribers and 1.7 million monthly readers, The Tennessee Magazine is the state’s most widely circulated periodical. The magazine is published by the Tennessee Electric Cooperative Association and Tennessee’s 23 electric cooperatives. Visit tnelectric.org or tnmagazine.org to learn more.

Power in Purpose
Scroll to top