News
You are here: Home1 / News2 / Community3 / A Lasting Commitment to Democratic Values

The 19th Amendment to the U.S. Constitution was approved by Congress on June 4, 1919, but it took more than a year for the measure granting women the right to vote to gain ratification by 36 states. On Aug. 18, 2020, the nation marks the centennial of this human rights milestone.

Rural America was built on and owes much of its success to family-run farms and businesses. While dads and husbands are often celebrated throughout history and heritage, wives and mothers have been full partners in creating thousands of communities. In fact, electric cooperatives have served as incubators for the leadership skills that guide co-op-served communities today.

“Historically, rural wives were always isolated and only had interaction with their husbands and children, but they helped run farms and ranches and ran their homes,” said Betsy Huber, president and CEO of the National Grange.

Founded in 1867, the Grange chapters took root as fraternal community organizations committed to promoting sound agricultural concepts in the North, South and the expanding West.

“From the very beginning, women could hold any office in the Grange,” said Huber. “We have 13 offices, including four that are only open to women.”

By the early 1900s, organizations like the Grange were providing rural women with meaningful leadership opportunities and fueling passions for full engagement in public life that included political participation.

With the rise of suffragist sentiments, the Grange in the early 20th century routinely included women in governance decisions, said Huber. “One of our national agriculture committees early in the last century had six members, three men and three women who reviewed and discussed the resolutions submitted by local Grange chapters that ultimately set policy for the National Grange.” 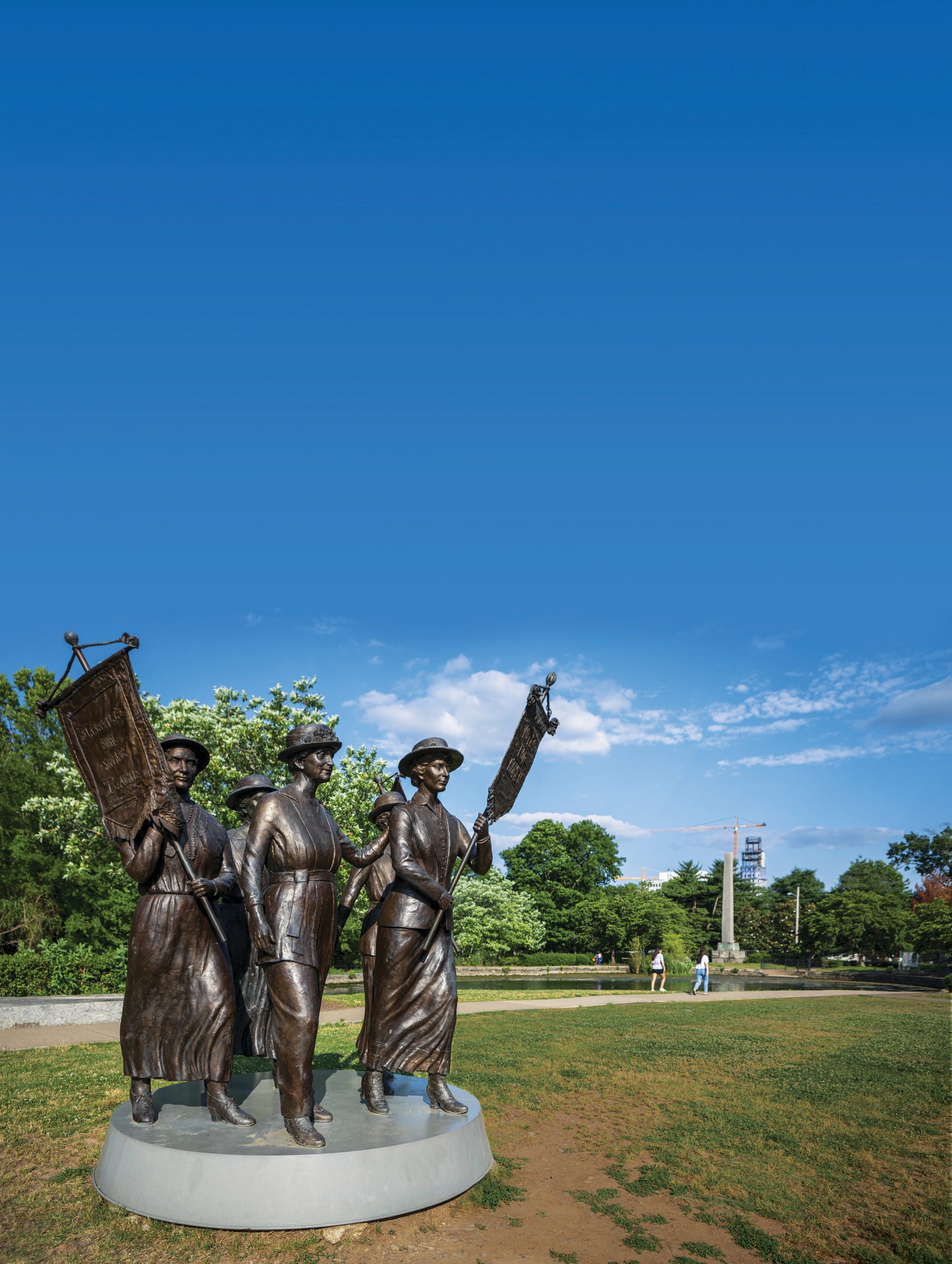 The Woman Suffrage Monument in Nashville’s Centennial Park features five women who were actually in Nashville during the final ratification effort: Anne Dallas Dudley and Frankie Pierce of Nashville, Sue Shelton White of Jackson, Abby Crawford Milton of Chattanooga and Carrie Chapman Catt, the national suffrage leader who came to Nashville during the summer of 1920 to direct the pro-suffrage forces and stayed at the Hermitage Hotel.

Among the tarm women embracing the suffragist cause was Febb Ensminger Bum, a widow from Tennessee’s McMimi County who ultimately played a decisive role in earning women die right to vote and forever changing U.S. history.

“Suffrage has interested me for years,” Mrs. Bum once told a reporter.

Between miming her farm and caring for her family, she followed news accounts from Nashville and was turned off by harsh opposition speeches against ratification in the summer of 1920. In August, she penned a seven-page letter to her son, Henry T. Burn, a freshman representative in the House of the Tennessee General Assembly.

“Vote for suffrage and don’t keep them in doubt,” wrote Mrs. Burn to her 24-year-old son. “Don’t forget to be a good boy and help.”

With the letter from his mom in his pocket, Rep. Burn broke a 48–48 deadlock by changing his vote to pass the measure, and women nationwide were guaranteed the right to participate in all national elections.

“I spend a lot of my time encouraging co-op members to contact their legislators, and mother-son influence is a great example of true grassroots activism,” said Amanda Wolfe, a National Rural Electric Cooperative Association (NRECA) senior political advisor who lives in Nashville.

The area where Mrs. Burn once farmed and raised her family is still served by Decatur-based Volunteer Energy Cooperative, said Wolfe, adding that voters there are still inspired by the state’s role as being the 19th Amendment’s “Perfect 36” — a reference to its decisive ratification role.

“Voting is so much more than just a right; it is a privilege,” said Wolfe. ‘The Suffragettes fought for generations to finally win that privilege 100 years ago, and every time we cast a ballot, we honor their memories.”

When President Franklin Delano Roosevelt created the Rural Electrification Administration in 1935, farm magazines quickly published stories about the news. Maye Shaw of Quitman, Texas, was a former teacher and regular reader who knew life on the farm would be easier with electric power.

She wrote Rep. Morgan G. Sanders for information and persuaded her husband, Virgil Shaw, to look into it. By 1937, they both were riding through the surrounding countryside, recruiting members and collecting $5 sign-up fees. Mr. Shaw eventually became the founding general manager of Wood County Electric Cooperative, which now serves nearly 36,000 meters and is still headquartered in Quitman. 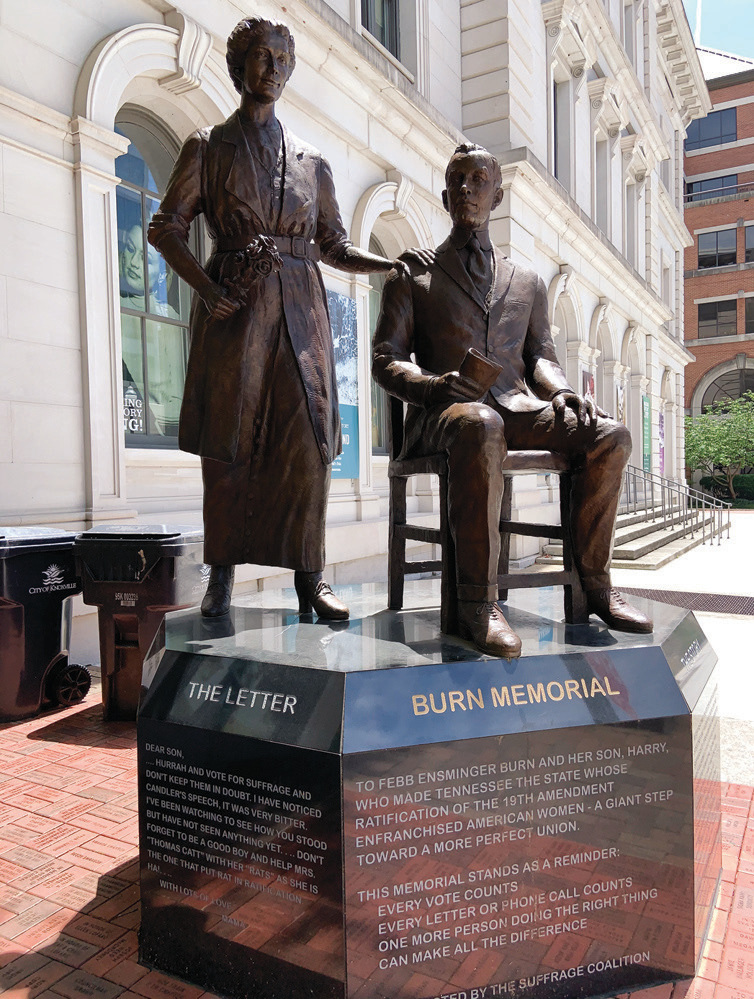 Erected in 2018, the Burn Memorial depicts Rep. Harry Burn of Niota and his mother, Febb, and honors each of their roles in the ratification of the 19th Amendment.

“Though it was men who signed their names to charter Taylor EMC (in 1937), women have played a vital role in the cooperative’s development and success,” wrote authors of a 75th anniversary book on the history of Flint Energies. The Reynolds, Georgia-based co-op, originally founded as Taylor Electric Membership Corp., has enjoyed an active female membership since its early days.

Beulah Taylor and Ruby McKenzie became the cooperative’s first female board members in 1938 and helped lead the co-op through some of its formative years.

“Homemakers living in rural Taylor County spurred the cooperative’s early membership growth,” wrote authors. “Eager to bring the benefits and conveniences of electricity to their homes and farms, they held neighborhood meetings and took applications to further the cooperative cause.”

In 1939, when the Rural Electrification Administration approved its first loans for electric cooperatives in South Carolina, women were actively involved in the formation of Darlington-based Pee Dee Electric Cooperative.

Mrs. E.S.J. Evans, the home demonstration agent for the Darlington County Agricultural Extension Service Office, was an organizer, and Miss Sue Coker and Mrs. E.A. Gray were elected to the founding board.

“We provide the information to co-op consumer-members to find out how, where and when to vote and information on the issues that affect rural communities,” said Laura Vogel, an NRECA senior political advisor. “We do not tell people who to vote for, and we don’t endorse candidates.”

Many electric co-ops are supporting National Voter Registration Day on Sept. 22 to encourage political participation leading up to the November elections.

“With so many uncertainties brought on by the COVID-19 pandemic fueling concerns about how voting will proceed this fall, electric co-ops can play vital roles in reminding members of important dates and explaining rule changes,” said Vogel. “There will be great opportunities to meet community needs on information about mail balloting or changes in precinct operations, ensuring healthy turnout and widespread voter participation.”

Derrill Holly writes on consumer and cooperative affairs for NRECA, the national trade association representing more than 900 local electric cooperatives that serve 42 million Americans across 56 percent of the nation’s landscape.

A portion of Coronavirus relief funds to target rural broadband

Co-ops Respond to Changes at TVA
Scroll to top