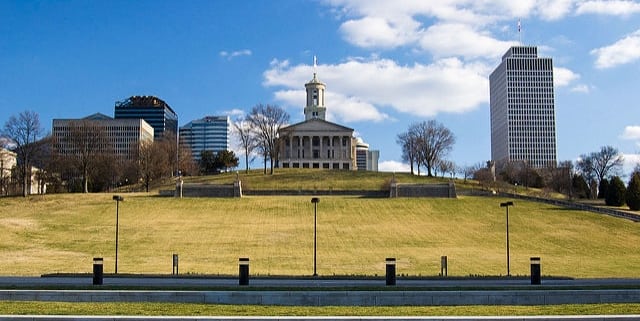 Working late into the evening, the 110th General Assembly completed its work and adjourned SINE DIE on Wednesday, April 25, 2018. At least, we think they did (see below). It was a successful session for Tennessee’s electric cooperatives. Two significant pieces of legislation championed by co-ops are now law, and numerous bills with negative impacts were defeated.

Given that the final hours included acrimonious debate between the chambers, tension between the House and Senate was high. The first bill of the final day became the final bill of the session, as it required two separate Conference Committees to reconcile differences in the language. What was so unusual was that the committees produced the same legislative language in their reports. The first one failed when voted on by the House, the second (and identical) one passed several hours later.

However, the more detail-oriented Capitol watcher may wonder whether or not adjournment actually took place. According to the State Constitution, the legislature can only adjourn if either the House or the Senate passes a joint resolution and the other body concur in the same resolution. That is not what happened in 2018. After the long and sometimes bitter final day, both chambers passed their own resolutions and neither body formally endorsed the other one.

Barring a constitutional crisis, don’t expect any members of the legislature to call for their colleagues to return to Nashville to correct the formality, though. Election season has now begun.

The summer and fall of 2018 will likely see record amounts of campaign activity. Six republicans, three democrats, and 26 independent candidates have filed petitions to be listed on the ballot to become Tennessee’s 50th governor since the term-limited Bill Haslam is unable to seek a third term. A competitive race to replace the retiring Bob Corker in the United States Senate could have national implications in terms of which political party controls the majority of seats. These two statewide races alone could result in over $50M of campaign spending as television commercials and direct mail pieces flood the state.

Additionally, three of the nine members of the United States House of Representatives are either retiring or seeking other office. This means the citizens of their districts will have the opportunity to elect new members of Congress. In the case of the 2nd Congressional District, in Knoxville and surrounding areas, it will be the first time since 1965 the Congressman will not hav the last name Duncan.

And now that the legislature has adjourned, state candidates are free to join their federal counterparts and fully engage in fundraising activities. Many primary elections will immediately kick into high gear, as the high degree of change could result in as much as one-third of the state legislature being new in 2019. Among state representatives who represent districts that include a electric cooperative, only two incumbent House members are running for re-election without opposition.

Short summaries of the major issues that were enacted into law are provided below. In addition to the summaries provided below, you can view the final bill reports for this session, which include information about numerous pieces of legislation that were defeated throughout the year (smart meters, round up programs, utility board composition, and others).

The State House and Senate approved legislation that will ensure efficient use of cooperative infrastructure for the provision of telecommunications and broadband services. After passage of the Broadband Accessibility Act in 2017, electric cooperatives were allowed to sell retail broadband services for the first time in their history. However, as many co-ops began to examine the possibilities a significant stumbling block to providing these services needed to be removed.

The fastest route to building broadband networks is for a cooperative to utilize its existing poles and routes of electric line for installation of new fiber-optic cables. However many of those routes cross private property, where the easement allowing access to the property was either prescriptive or limited to the provision of electric energy. This same issue has been the subject of significant litigation in Missouri, so TECA’s government relations team set out to change state law. Senator Ken Yager (R-Kingston) and Representative Gerald McCormick (R-Chattanooga) filed legislation to ensure that any easement used by a cooperative for the provision of electric energy could also be used for the co-op’s secondary purposes.

Thankfully, the General Assembly listened and passed Senate Bill 1646. After consideration by seven committees as well as the full House and Senate, the bill was approved unanimously. While other states have struggled with this issue, this legislation serves as a fantastic example of how electric cooperative’s unified voice can make a real difference at the Capitol.

In response to an anticipated rule-making from the Department of Revenue, TECA joined with TMEPA, the Tennessee Gas Association, the Tennessee Association of Utility Districts, and the Tennessee Municipal League to propose legislation that prohibits the Department from applying sales tax to many fees charged to commercial and industrial utility customers. These fees, such as connection fees, have never before been subject to sales tax. The bill was sponsored by Sen. Ken Yager (R-Kingston) and Rep. Steve McDaniel (R-Parkers Crossroads).

Thankfully, the legislature listened. After some initial procedural uncertainty due to the bill’s effects of “forgoing” revenue to the state, the bill sailed through committees with broad support. It was enacted and made the law of the land on April 27.

Titled the “Competitive Wireless Broadband Investment, Deployment, and Safety Act of 2018,” legislation that was intended to promote the deployment of small cell technology to facilitate 5G wireless services was passed after significant behind the scenes negotiation. However, those negotiations never spilled over into the legislative process as committee meetings saw little public fanfare over the issue.

The new law creates minimum standards for local governments to create siting requirements for small wireless facilities, and effectively prohibits local governments from imposing stricter requirements than those prescribed in the legislation. It also creates a maximum annual rental fee that local governments may charge for allowing this equipment to be attached to its buildings, water towers, traffic signals, light poles, etc.

Importantly, the language exempts electric cooperative (and all other electric distribution) infrastructure from the effects of the bill.

Recognizing the need for the State’s investment in ensuring broadband becomes available for all Tennessee citizens, Governor Haslam included $10M in his original budget proposal for the Tennessee Broadband Accessibility Grant Program which is administered by the Department of Economic and Community Development. Rep. David Hawk (R-Greeneville) and Sen. Ken Yager both presented amendment requests to their respective finance committees, at TECA’s request, that would increase the fund. Additionally, Governor Haslam recommended an additional $5M of funding through his requested supplemental amendment to the budget.

At the end of the day, the budget passed by the legislature includes a total of $15M of broadband grant funding. The department will begin accepting applications in mid-July. To learn more about the program, visit ECD’s website.

At the end of March, TECA participated in Broadband Summit with the Governor and ECD. See the story here. We appreciate the dedication that Governor Haslam and his administration has shown to electric cooperatives and their involvement in broadband.