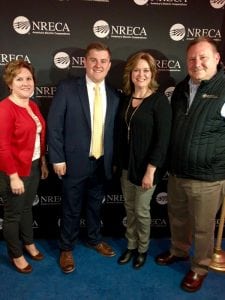 Lay meets with FLEC representatives from FLEC backstage after his speech.

Lay talked about the importance of co-ops and the impact that the Washington Youth Tour had on his life.

“We are all blessed and incredibly lucky to live in such a time where it is as simple as flipping a switch to say, ‘let there be light,'” said Lay during his speech. “Upon applying for the Youth Tour I realized I had nothing to lose, but everything to gain. I made a decision to invest my time into the application, and I appreciate the people behind the Washington Youth Tour for matching that investment into me and my future.”

“Aaron stood out on Youth Tour as a leader among leaders,” said David Callis, executive vice president and general manager of the Tennessee Electric Cooperative Association. “He did a phenomenal job addressing the NRECA annual meeting, and I am excited to see how he uses his talents to tell the story of rural Tennessee.”

Aaron’s full speech is below.

“You have to find what sparks a light in you so that you in your own way can illuminate the world.” – Oprah Winfrey

Ohhh, the story of electricity. You know, The one we learned about in elementary school and will be taught to generations to come.  Benjamin Franklin and his urge to play with lightning.

Thomas Edison with the invention of those things called light bulbs that I’m positive every person in this room has had the pleasure of replacing a time or two. In 1880- Small electrical station based on Edison’s design were in a number of U.S. cities.

Life as they once knew it was beginning to change drastically.  I said U.S. cities, the hustle and bustle, when most people think of the United States cities like Atlanta, New York City, and Washington come into the picture.

But ladies and gentleman the heartbeat of this great country is its rural areas. President Roosevelt agreed.

In 1935, 82 years ago, the Rural Electric Administration was created to bring electricity to rural areas such as those that the majority of us in this room come from.

I recall the stories of my great grandfather milking cows by hand and then carrying the milk in cans down to the spring house to keep it cold until the truck came to pick it up for processing. Imagining such a time without electricity is inconceivable.

For today’s society, especially today’s youth, a phone without a phone charger, a Pop Tart without a ten second microwave ride or an early morning shower without hot water would be considered unbearable.

We are all blessed and incredibly lucky to live in such a time where it is as simple as flipping a switch to say, “let there be light.”

“Nothing can dim the light that shines from within” –Maya Angelou

Let there be light for inspiration within yourself…

Like any person in my position, I was a bit skeptical of getting on a bus and traveling to a large city where the only three people that I knew were me, myself, and I.

Little did I know that the multiple people traveling from all across the state and nation to Washington D.C. would soon become some of my closest friends.

From meeting our state’s congressional delegation, visiting the sights and memorials of our Nation’s history in D.C., to fellowshipping with new-found friends aboard the top level of the Spirit of Washington on the Potomac River, this trip to our Nation’s capital had quickly turned into a trip of a lifetime.

Having the opportunity to stand on the steps of the Lincoln Memorial where Martin Luther King Jr. delivered the famous “I have a Dream” speech inspired me that I too, a rural farm kid from East Tennessee have a dream as well.

Visiting the homes of former presidents, honoring the service men and women who gave their life during World War II amidst the water fountain- it is these moments throughout the trip that were truly life changing.

The humbling experience of the laying of the wreath and changing of the guard of the Unknown Soldier at Arlington National Cemetery gave me great pride of the sacrifice of our fallen.

You see, it isn’t the places we went or the food we ate but the inspiration drawn, friendships created, and memories made during the Washington Youth Tour that I will cherish forever.

Let there be a light of gratitude…

“Gratitude is a quality similar to electricity: it must be produced and discharged and used up in order to exist at all.” – William Faulkner

These experiences reminded me of how this amazing trip to Washington was even possible. The vision of the leaders of the NRECA and our respective state and local cooperatives know how important young leaders are.

Young people have been coming to Washington, D.C. for years because of the commitment they have made to their communities, state, and nation, and I am forever grateful for that commitment.

The Washington Youth Tour is much more than seventeen-hundred teens from across the country coming together to tour Washington. It is about discovering and inspiring the young leaders of tomorrow individually.

Taking time to encourage and polish young people like myself is not always as simple as it sounds, but I think I can speak for every person on the trip when I express a sincere Thank you.

“We cannot always build the future for our youth, but we can build our youth for the future”- Franklin D. Roosevelt

Let there be light for youth leadership…

I have always been taught that a leader is meant to empower, not overpower and that with ability comes responsibility. There is a Japanese proverb that goes “None of us is as smart as all of us.”

Working together in groups of people can become somewhat chaotic at times but one principle always shines through, and that is that working together will always take you forward.

While walking the streets of Washington, D.C. it could be viewed as just a bunch of large buildings made of marble and granite, but after attending the tour I have gained a new appreciation for the individuals who work in these buildings as they are the ones that make this country great.

Upon applying for the Youth Tour I realized I had nothing to lose but everything to gain. I made a decision to invest my time into the application and I appreciate the people behind the Washington Youth Tour for matching that investment into me and my future.

You see, there would not be any young leaders without the forethought of the leaders in front of them. After all, the universal symbol of a good idea is a light bulb. Let there be light.

Telling the co-op story to a national audience