A few weeks ago, when I stopped at the gas station on my way to work to fill up, the math was pretty easy. Ten gallons of gas went in the tank, and the price was $2.50 per gallon. After handing the clerk $25, I drove away and didn’t give it another thought. Several days later, I stopped after midnight to get enough fuel to make it home at the end of a long trip. Once again, 10 gallons of regular unleaded went in, and $25 dollars came out of my wallet. Simple.

When you get gas, you are essentially prepaying for energy your car will use at some point in the future. And it’s easy to visualize what you are paying for because you can see, smell and touch it. A gallon is a familiar unit of measurement. How many gallon jugs of milk have you carried into your home over the years?

For most of us, we don’t put much more thought into paying our electric bill than I did filling up the truck. An envelope arrives in the mail, we open it, write a check and send it in. Or it could be even easier because you have agreed to allow a draft directly from your bank account. Some folks may take a quick look at more of the details that are printed on the bill, but how many fully understand what they’re paying for?

For many years, your co-op has worked very hard to make paying your bill as easy and painless as your trip to the pump. This is despite the fact that purchasing electricity is very different than buying gasoline. Here are three reasons why:

First, electricity is a bit of a mystery. We know it is there, despite being unable to touch, smell or even see it, because we can see the result of its existence. But, as the old adage goes, “Out of sight, out of mind.”

Second, do you know how much energy you are consuming at any given time? In your car, there is a gauge that shows how much fuel is in the tank and probably a display showing your current miles per gallon. But where is the same gauge in your house to show you how much electricity you have consumed? Most of us have very little idea of how much energy our refrigerators, air conditioners, water heaters, ovens, heaters and other major appliances use. So how do we know what it costs when we turn them on? When you open the envelope from your co-op and the bill says you used 1,652 kilowatt-hours of electricity last month, how many milk jugs does that even equate to?

Those are hard questions to answer — but not because there is no equipment that will help you monitor your use. Rather, the question is difficult because our society by and large doesn’t want to know the answer. We have become accustomed to having electric energy available on demand, without exception, at low cost. It’s testament to the hard work of tens of thousands of people whose mission never takes a day off. The luxury that universal electrification affords us as Tennesseans and Americans is not to be taken lightly and has changed the world in so many positive ways over the past 100 years. For that, we should be grateful.

Lastly, there is no practical way for you to purchase and store electricity to be used later (although this could change in the future — see the June 2015 column “Is the future here now?” at tnmagazine.org). When you flip the switch, the electricity you consume is being generated and transmitted to you at that exact same instant. Other common energy sources like wood, gasoline, diesel and even natural gas can be stored in large tanks in preparation for future needs. But to run your air conditioner on a hot July afternoon, you are relying on your electric utility to provide a seamless connection across hundreds of miles of wires to deliver that energy to you at the exact moment you need it — since electricity moves at the speed of light, 671 million miles per hour. This means the cost to generate this energy can be different depending upon the hour of the day, the time of year or even the activities of your neighbors or the factory down the street.

However, technology is advancing at such a rapid pace that the complexity of the electric grid is quickly becoming less of an impediment to the average person’s understanding of his or her own energy consumption. And it is also helping your co-op have a better understanding of how and when entire communities will require their energy — even though the members will continue to demand electricity in real time. With this new information will come better and more transparent methods of paying for our consumption, which I look forward to discussing in a future article. 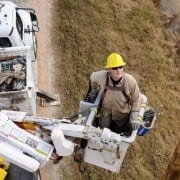 Who is your power company?

To seal or not to seal
Scroll to top