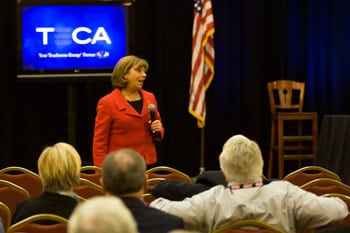 NASHVILLE – The 72nd annual meeting of the Tennessee Electric Cooperative Association was held Sunday – Tuesday, Nov. 24 – 26, at the Nashville Airport Marriott. The theme of the meeting was “Power of Potential,” and Bill Rogers, Caney Fork Electric Cooperative general manager and president of the TECA board of trustees, called the meeting to order.

“The Tennessee Electric Cooperative Association informs and protects co-op members,” says Rodamaker, a longtime member of the association’s board of trustees. “It is an honor to be a part of an organization that has such an important mission.”

“Congratulations to those who have been chosen for leadership roles,” said Callis. “We appreciate their service and are confident they will provide sound direction and represent Tennessee’s electric cooperatives with honor.”

The Tennessee Electric Cooperative Association is a trade group representing the interests of Tennessee’s 23 electric distribution cooperatives and the 1.1 million consumers they serve.