Somerville, Tenn.—A renewable energy survey recognizes the customers of Chickasaw Electric Cooperative as one of the top consumers of solar-generated power in the nation. According the report from the Solar Electric Power Association, CEC generates an average of 216.7 watts of solar energy per customer, the fifth most of any utility in the nation.

This is the first time Chickasaw EC has ranked on the survey. The recognition follows the installation of the West Tennessee Solar Farm in early 2012, which generates 5 megawatts of solar power brought onto the TVA power grid through Chickasaw EC.

The West Tennessee Solar Farm, located in Haywood County, is a cooperative program between the University of Tennessee, Chickasaw EC, TVA and others. It adds about five megawatts of solar power onto the TVA grid, which is enough to power 500 homes. The power harnessed at the solar farm enters the TVA grid through Chickasaw EC lines. The West Tennessee Solar Farm is the largest single source of solar power in the TVA system.

John Collins, General Manager for Chickasaw EC accepted a plaque to mark the occasion at the utility’s August 6 annual meeting in Somerville.

“It is a true honor to be recognized by SEPA for our efforts to add solar power to the TVA system,” Collins said. “The West Tennessee Solar Farm is a tremendous asset to our community and to know it is one of the top per capita generating systems in the country is a feather in our cap.” 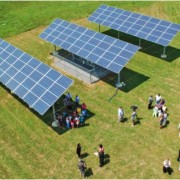 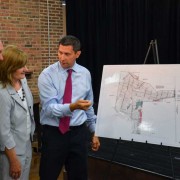 The electric grid connects us all
0 replies