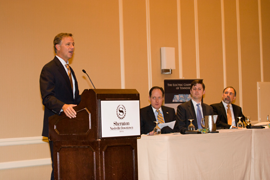 More than 200 directors and employees from Tennessee’s electric cooperatives were in Nashville Monday and Tuesday, March 12 and 13, for the 2012 Tennessee Electric Cooperative Association’s legislative conference. Attendees met with their legislators on Capitol Hill to help them better understand electric cooperatives and the issues that impact them. Tennessee Gov. Bill Haslam also addressed the group.

“It is an honor to travel around the state and meet people who really do care about their communities, and you all represent businesses that do that,” said Gov. Haslam. “You really are trying your best to provide a service that people need at the lowest possible cost. I am grateful for what you are doing.”

Tennessee’s electric cooperatives maintain an active presence in Nashville and Washington, D.C., to be certain that the interests of co-op members are protected. “Our electric cooperatives are private, not-for-profit businesses, but the decisions made by elected officials can affect co-op members in big ways,” says David Callis, general manager of the Tennessee Electric Cooperative Association. “It is important that legislators understand the impact their decisions will have on our co-ops’ ability to provide safe, reliable and affordable energy.”

During the conference, TECA staff explained to co-op directors and employees how this year’s redrawing of house and senate districts had impacted their service areas. Attendees were also briefed on pending legislation that would impact Tennessee’s electric cooperatives. Armed with this information, the co-op delegation took to the hill to help legislators better understand the important role of electric cooperatives and their position on various issues and legislation.

Most issues affecting co-ops this year revolve around local control. “We believe that our members are best served when local decisions are made by local board members elected to run the cooperative,” says Mike Knotts, director of government affairs with TECA. “We are concerned when legislation limits a board’s ability to act in the best interests of its members.”

The primary issue facing electric cooperatives this year is nothing new – pole attachments. Electric utilities charge cable TV and telephone providers when they attach their wires to electric poles. Cable and telephone companies believe these rates should be lower, but co-ops believe they charge fair rates based on the actual cost of installing and maintaining the pole. “We believe that our local boards are more than capable of establishing fair attachment rates,” says Knotts. “This is an issue that is best settled locally, not by state government.”

“The impact of co-op members coming to talk with their legislators is huge,” said Callis. “Educated and informed legislators are a key component of low-cost, reliable power in Tennessee.”